Why Is Anyone Talking About Yammer When We Have (and Love!) Teams?

At the time, I was an intranet manager at an association and decided to go along with Microsoft’s “on by default” rollout of Yammer. Why stop it? I started with a pilot for a few weeks to test it out, and then I opened things up to all staff. I got lots of folks interested in using it, but many wanted “private” groups for their teams to collaborate and communicate. They also heavily used the “private messaging” option in Yammer. They contributed to the public groups for sure, and enjoyed engaging across the org, but they really were craving some “private” options.

Imagine the confusion, then, when this “Teams” thing was suddenly all the buzz coming from Microsoft just a year later. Group spaces for people to communicate and post files? Check! “Chat” that seemed a lot like “private messaging”? Check! Option to subscribe and get email notifications for missed activity? Check! Plus, the interface was just so appealing, the chat was a much better experience than the “private messaging” in Yammer, and there were so many additional features in Teams.

Why the heck would we still use Yammer now that we have this new shiny Teams toy?

This is a struggle many organizations have. The “when to use what?” question comes up constantly. And when Teams started to appeal to a much wider audience than Yammer did, many in the Microsoft 365 community spoke of the imminent “death” of Yammer. But Microsoft was not saying that at all.

One of the best and simplest visuals I have ever seen come from Microsoft was this “inner and outer loop” slide (see below). It was first shared at Ignite 2017 (see presentation recording on Channel 9) to help people better understand when to use what. They emphasized that Teams is for your “inner loop” and Yammer is for your “outer loop” (and email is just always there because we cannot seem to get rid of the darn thing). 😊 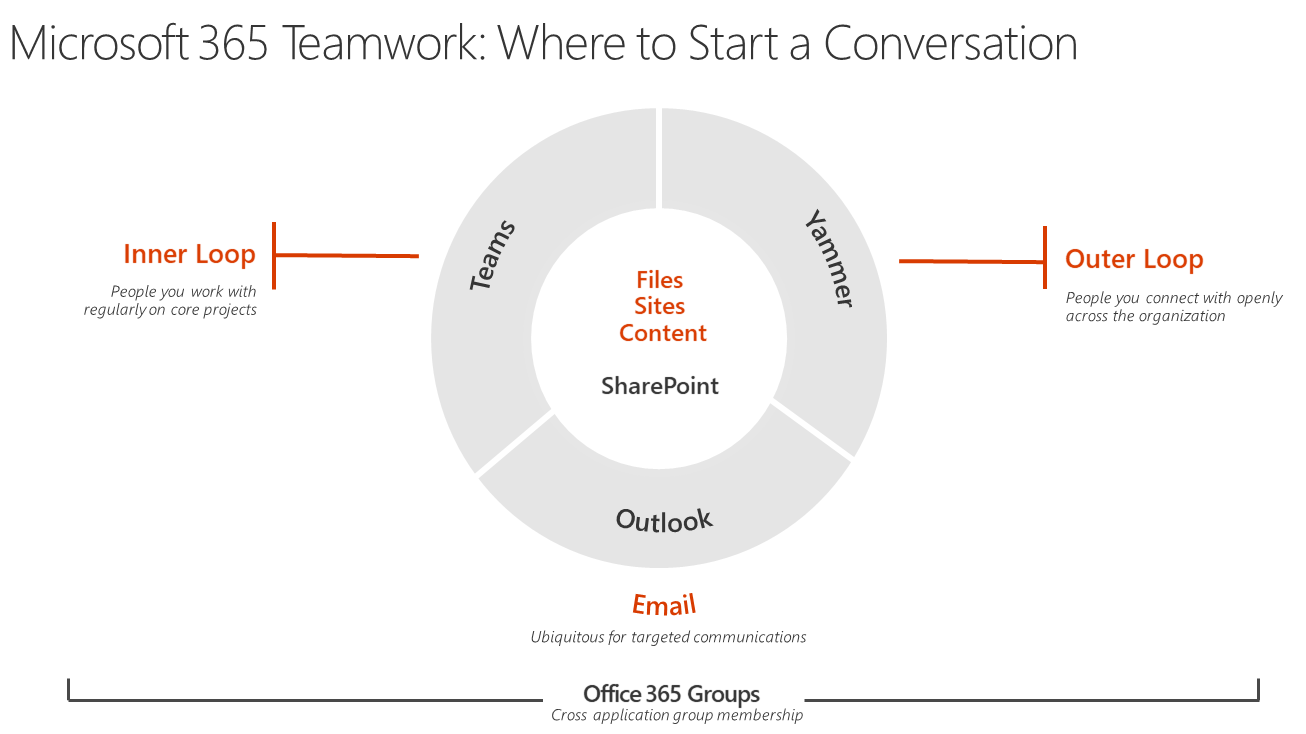 I think many folks are now sold on the value of using Microsoft Teams. Where does that leave Yammer? Teams can now accommodate up to 25,000 members in a single team. Unless you work at an organization that with more employees than that, you could conceivably create a “public” Team for the “cross-org” social/comms needs and set up channels to replace the various groups you would have used in Yammer. It is absolutely an option, and I know many who decided to do just that. This all begs the question, do we even need Yammer anymore?

As a person who loves both Yammer and Teams, I will share why I think Yammer still has a purpose that is worth considering. This may all change (most things do!) as Microsoft continues to evolve their plans for both platforms. But for right now, March 2021, here is my take:

1. Yammer has web parts in SharePoint! This is huge for anyone wanting to bring social elements to the homepage of their SharePoint intranets. In my last organization, I used various Yammer web parts on our homepage to increase engagement among staff. I displayed a “Photo of the Week” via a Yammer web part, and all staff could easily react and comment on each photo. I posted web parts that filtered on a specific “topic” in Yammer to display polls and certain hashtags like #TBT and #FurryFriday (the latter for our animal lovers who cannot wait to share pet pics)!

2. Yammer has an “ask a question” discussion type! This is a great option for those who want to ask a question of their colleagues and have that question be visible to as many people as possible. It also allows them to mark a “best answer” that gets displayed at the top of all replies, making it a fantastic resource for knowledge sharing. 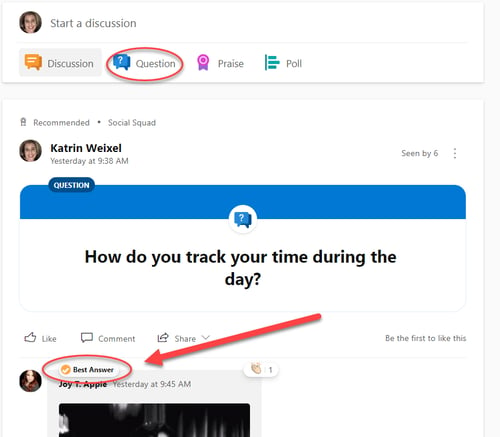 3. Yammer has Topics! You can use #hashtags or assign specific “topics” to your Yammer posts, making them very easy to find in filtered search results (or, as I mentioned previously, to use for displaying specific content in SharePoint’s Yammer web parts).

4. You can easily move a Yammer conversation to another group! How many times have you been in Teams, frustrated that someone started a conversation in the wrong channel or even the wrong Team? Especially when replies have started coming in, there is no way to “move” that conversation elsewhere. But Yammer? Yammer can do that! 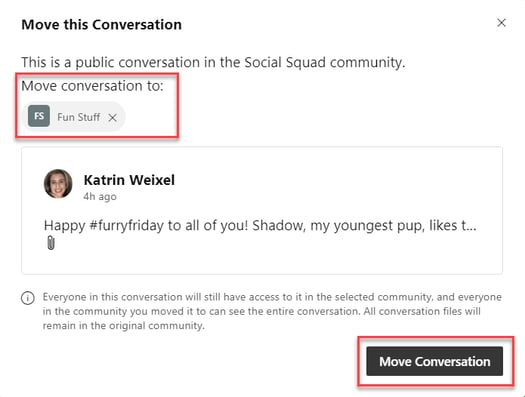 5. Yammer allows you to “close” a conversation! When you do not want people to have the option to reply to a thread anymore, you can simply close the conversation. Teams? Can you do that? Nope! 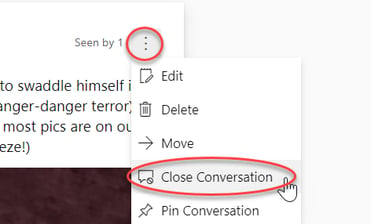 6. Yammer can pin a post to the top of the community feed! Remember how excited you were to learn that a conversation in Teams could be pinned? Remember how disappointed you were when you learned what that really meant? Most people think “pinning” a post would actually make it easy to see at the top of a page. That is what Yammer does with a pinned conversation. Teams, on the other hand, makes you go to the info panel, scroll all the way to the bottom of the list of team members, and THEN you can finally see what posts have been pinned. Yeah, not as exciting… 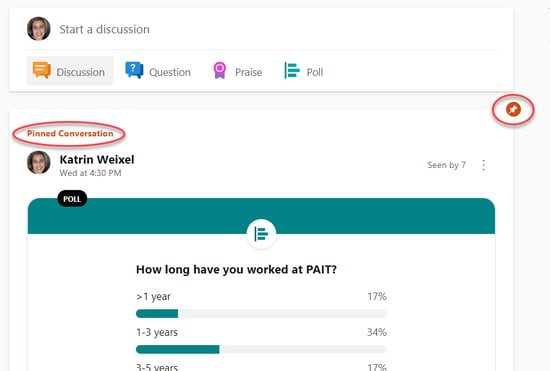 7. Yammer tells you how many have “seen” your post! Teams “read receipts” finally rolled out last year for chats, and that’s awesome. BUT how many times have you posted an important message to your team in a channel and then wondered if anyone actually had seen it? I would love at least something like this simple “seen by” option inside of Teams.

8. Yammer has inclusive and unique reactions! The reactions in Yammer and Teams right now are different. Yammer includes the ability to like, love, laugh, celebrate, thank or be sad. And there is now an option to choose skin tone for the like and thank reactions, making them more inclusive. Teams has different reactions (I suppose more work-related than social/fun-related like the Yammer ones) for like, love, laugh, surprised, sad, and angry. No skin tone options- all reactions in Teams are currently yellow. 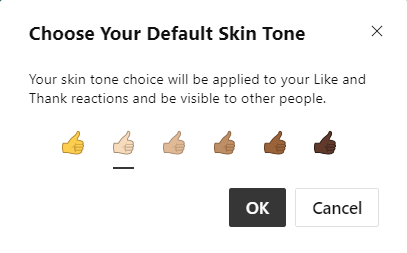 9. Yammer and Teams can live together! There is an app in Teams called “Communities” that will allow you to pin your entire Yammer network inside of Teams, easily accessible on the left rail for you or for everyone in your org. Teams can still be your one-stop-shop, but you can have a clear distinction between your fun/social/org-wide “communities” and the various “Teams” you are on to get your work done. To me, that makes more sense than seeing a “public” Team for that purpose taking up space on my “Teams” tab that is already quite crowded with the multitude of Teams I serve on for work.

I am sure I am missing other features Yammer offers that are not available in Teams, but I’m also sure you know that Teams offers so very much that Yammer (nor any other platform) can offer. I adore Microsoft Teams! It lets me work with others, chat individually and in groups, work on files, bring in other applications via tabs, and (huge!) have pretty much all my meetings and calls, too! Yammer and Teams have different purposes, and I think once you understand them, you can decide what makes sense for your specific organization and its needs. I just ask that you not “scoff” at Yammer because it has a lot to offer. Understand it, plan for it, and use it if what I have written above sounds appealing to you and your org’s needs!

I have also recorded a video walking through these 9 Yammer items for your convenience.

Should you and your organization be considering adding Yammer into your communication and collaboration strategy, but are unsure how to get started, do not hesitate to contact our team.  We at PAIT Group are happy to help! 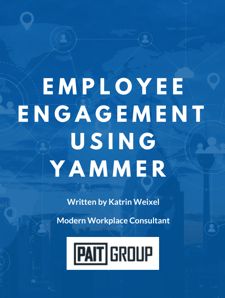 Here are some additional resources available on Yammer: