This is not about working from home. It is not 10 easy ways to replace in-person meetings with Microsoft Teams. I am going to write about what comes next.

Life after a big disruption.

First a Quick story, A few years ago the London Underground suffered a partial shutdown because of a labour dispute. For two days many people who commuted around London couldn’t take their normal route to work. According to 3 economists who studied the event later, as expected, a large number of people found some other way to work. They carpooled, took taxis, ride-share services, in some cases even bit the bullet and drove themselves.

Once the strike ended and the Underground was back in service, most people went back to their normal commute. Most people. It turns out that a significant minority found out they had been going to and from work the wrong way. Maybe they found a faster way, a more comfortable trip, something cheaper, but definitely something different, and they never went back to the old way. Two days of city wide disruption and some people figured out they had been going to work the wrong way, sometimes for years. 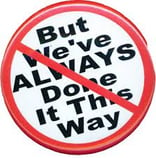 No inspirational quotes about crisis and opportunity, doors closing, windows opening, all of that. I am just saying, just because something has always been done one way doesn’t mean that way is the best.

My wife started working from home yesterday. It hasn’t been easy so far, but my wife is super smart. She is going to find some ways to work around the issues she runs into. Given some time she may even find a few ways that are better than the standard processes they use in her office. In particular her work relies fairly heavily on faxes and printed copies, neither of which are possible right now from home. She and the people in her office are going to struggle and, in the short term, they probably won’t be at peak efficiency.

They will get better at working from home, but that isn’t the point. Good or bad, they will find new ways to do things. In part this will happen because they have to, and the new ways may only apply while there are limitations that disappear when they go back to work. Maybe they will find some new ways of doing things just because, for the first time in years, they are thinking about what they are doing. The law of averages says some of those new ways will be better ways.

As part of what we do here at PAIT Group, people come to us to help them manage some fairly big changes in the way they do things. They migrate terabytes of data, skip over 10 years of technological change, and often request that we find a way to make the outcome as familiar as possible to their end users. I call this the "change everything, but don’t change anything" request. There is a drive to make everything as seamless as possible, and we often have to gently lead customers to realize that by doing that they are missing out on features that file shares don’t have, options that SharePoint or Exchange from 2007 hadn’t considered. Not changing anything can cause you to miss out on a lot of opportunities.

I am not the most public facing person here at PAIT. I rarely go to customer sites, conferences, or events. I don’t travel a lot.  Thus working from home is old hat for me, but even I have had to do things differently in the last couple of weeks. Stephanie Donahue wrote a blog article about working from home and now everyone here is turning on their webcams to prove they are paying attention and keeping up the personal connection. I use background blur to hide my poor housekeeping skills. More importantly, we have all had to think a little more about what we are doing, because kids are home, customers are distracted, and March Madness had nothing to do with basketball this year.

We are going to learn some lessons, because we have to. Take notes. Plan a meeting when things get a little closer to normal to go over the lessons learned. People are really surprising in their ability to adapt, so let them share their ideas. Pundits may predict that this moment in time will change everything about the way we work, but pundits thought we would have flying cars and 10 hour work weeks by now. We will learn lessons big and small, but the small ones are the most easily implemented and often have the best return on investment. Be on the lookout.