Microsoft Renews Its Vows with SharePoint

Last week my business partner Stephanie Donahue (@stephkdonahue) wrote a really great blog post on “The Rise of the Power User”. In this insightful post Stephanie talked about how SharePoint is being embraced again by Microsoft. She also made an interesting quote that stuck with me. She said that Microsoft was “renewing its vows” with SharePoint. This very poignant statement really seems to reflect what’s happening these days with Microsoft. I blogged about “The Future of SharePoint” event a couple of weeks ago and all the new features coming to SharePoint and how Microsoft is committing to SharePoint again. There’s an energy and excitement around SharePoint that hasn’t existed for years-- it's as if Microsoft went to couples counseling with SharePoint and started listening to how people were using SharePoint and decided things could work out.

Further evidence of this new commitment to SharePoint came when Jeff Teper (@JeffTeper) stopped by SharePoint Saturday Nashville this past weekend to answer questions from the crowd and hang out with us afterwards. Let this sink in for a moment, the Corporate Vice President for OneDrive and SharePoint stopped by a community event, on a Saturday, in Nashville, TN to very candidly answer questions about SharePoint…and THEN stayed for another hour and a half at SharePint (He’s also keynoting SharePoint Saturday Paris, but hey… Paris). I have to admit: I’m floored by this. As an organizer of several SharePoint events in the past I know how hard it was to get Microsoft involved. It’s like the sleeping giant has finally awoken and has started paying attention to what we want and HOW we are using SharePoint. 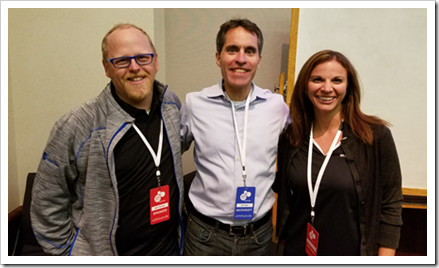 Let me point out the highlights from our conversations with Jeff. Some of this information may not be new to you, but it’s good to reiterate and it’s good to hear a VP from Microsoft putting some weight behind the information. Again, let me say Jeff was quite open, honest, and off the cuff with his responses. I hope you as a reader can appreciate Jeff giving answers to questions about things coming in the future without holding him 100% accountable to changes that may occur along the way. I think we as a community need to continue to encourage Microsoft to be this honest and open and engaged with us by understanding the story today may not be the exact story tomorrow.

The Future of On-Premises

As stated in the “The Future of SharePoint” keynote, Microsoft has heard us and is committed to on-premises. It was even stated there would be another release of SharePoint on-premises. Microsoft has also explained that on-premises SharePoint 2016 deployments WILL get online functionality in Feature Packs starting in 2017. I asked Jeff about a more specific timeframe for these feature packs. He stated that Microsoft hopes to be able to announce a more definitive timeline for those feature packs at Ignite this year.

The Future of Add-ins

There was a discussion about some of the angst ISV’s were experiencing with the announcement of the SharePoint Framework and Jeff noted that they could have done a better job at the Future of SharePoint event about pointing out that the Add-In model is not going anywhere. It’s completely as valid today as it was yesterday. The whole point of the SharePoint Framework is that Microsoft was analyzing how we were developing functionality for SharePoint. The saw and heard how many of us were injecting script into pages using JS Link and Content Editor Web Parts. The SharePoint Framework is a direct result of Microsoft listening to us and making script development more manageable, controllable, and less likely to break the page. That’s pretty freaking awesome.

The Future of Yammer

Freshly minted MVP Sean McDonough (@spmcdonough) asked why Yammer was not mentioned at the Future of SharePoint event and what their commitment was to Yammer. The response here is that Yammer is still alive and well, but that most of the changes lately have been behind the scenes integration, so there wasn’t really anything to “show” at the event. He also made mention of efforts to merge Yammer Groups and SharePoint Groups.

The Future of SharePoint Designer and InfoPath

When asked about the future of SharePoint Designer and InfoPath, Jeff stated that he sees PowerApps and Microsoft Flow replacing these technologies within a couple of years. He was VERY clear to state that they do not replace them today and that these tools have a way to go before they have the functionality of their predecessors. This is the first time I’ve actually “heard” this so definitely from someone at Microsoft, but it makes total sense to me and I’m glad to see Microsoft has a plan.

The Future of Forms

The Future of Microsoft Graph

The Future of Branding

Another big concern we have for our clients and the new SharePoint Framework is the ability to brand sites effectively and to be able to deliver a “world class” design experience while still following the accepted patterns and practices of the new framework. Jeff explained that there will indeed be a railed branding experience for Team Sites. This makes sense as the new Team Sites need to work in the mobile application and we can’t expect to do whatever we want and still have them work in the app. Jeff also stated that if clients need a fully branded site they will still be able to do that using the Publishing template. I see a future with a lot of Intranet Home Pages created with Publishing templates linked to department sites created with Site Templates. Branding is not dead… but it is changing.

The Future of Public Sites

One of the more interesting discussion points brought up was Microsoft getting rid of the public sites in SharePoint Online and the impact this has had on non-profits (That Sean McDonough is such a pot stirrer). Jeff’s response here was that he believed Microsoft has given ample warning about public sites going away so that companies could prepare. The feedback from the audience was that there are still many non-profits using the public sites and simply cannot afford to move them somewhere else and that the current answers offer not migration path for these clients. This was the only time I saw Jeff surprised during the event. He was honestly unaware that there were still so many companies that relied on the public sites. Jeff did explain that it was a conscience effort to focus on what SharePoint does really well by removing public facing sites and focusing on collaboration. To me this seems like an opportunity to let Microsoft know your thoughts on these public sites. For small and medium sized businesses, it’s a no-brainer to set up a simple public website in SharePoint Online since they have Office 365 anyway.

Jeff talked about other topics as well including their rationale of publishing iOS apps first before Android or Windows Phone. He also talked about things like no new portals (no Infomedia portal), instead they would focus on the 2 or 3 templates that people use most and make them really really awesome (and hey, if you need them customized you know how to get a hold of me).

So, yeah… a lot of awesome, honest, open, and straightforward conversation. A very sincere thanks to Microsoft and Jeff for taking his time to talk and hang out with us. I look forward to more of these frank discussions in the future. I think it really is a different Microsoft and the start of another SharePoint Honeymoon.

I’ve been reflecting on the changes I’ve seen within Microsoft and the SharePoint product team the past few months, on the upcoming changes to SharePoint, on the transparency of Microsoft, their willingness to hear feedback (and criticism), their willingness to own mistakes, and their sudden embracing of the community. Now, I’m a pot stirrer by nature, and I try my best to be objective and honest in my opinions. I just can’t seem to find anything to be negative about right now. With the efforts of Jeff Teper and team, Microsoft has built up a lot of good will. I’m willing to see where things are going. I feel like I’m being heard and I’m excited for the future. Have I drunk the Kool-Aid? I don’t think so. I think Microsoft is finally getting it…